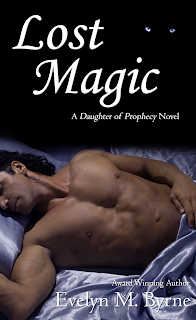 LOST MAGIC
After realizing he has been drugged, Colin O'Kelly attempts to transport home to escape his enemy. When he awakes he is in a strange location with no powers, or the memory that he ever had them.
Kate has been hiding deep in the Florida Keys for twenty-five years when a stranger drops into her protected haven. Can she overcome the fear she carries for her own people, the Tuatha Dé Danann, or will she run once she finds out Colin's true nature.
Frantic to find Colin, Megan and Seamus discover that Mallaidh has sent two hurricanes on a collision course for the Keys in order to either flush Colin out or finish him in a watery grave. Can Megan and Seamus stop the hurricanes before they hit, or this just a distraction?
I am so excited about the release of my third book in the Daughter of Prophecy Series. Go to my website for more information.
Evelyn M Byrne
or to
White Bird Publications
Posted by Evelyn M. Byrne at 11:12 AM No comments:

THIS IS NATIONAL NOVEL
WRITING MONTH.

Wishing all of you that are participating in it this year the best.
I have seen some great novels come from this project.
See you all at the finish line!
Posted by Evelyn M. Byrne at 1:05 PM No comments:

Out of this world

Today's guest blogger is Patricia Lane.
Thank you Patricia for taking the time to tell us how you conceived Mitera. 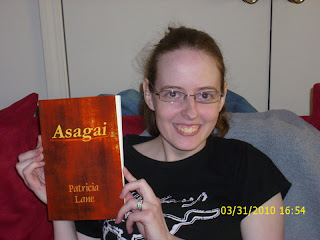 I have been asked many times by many people who have seen me scribbling away in a notebook or who know I am a writer or have actually read my novella, Asagai, where do you come up with this stuff? Sometimes dreams. Sometimes just sitting around being bored. And sometimes a seed gets planted in High School Senior English Class.
Yes, the world of Mitera came about from an English assignment.
Of course, back then it wasn’t called Mitera. Asagai was at first just a short story to get the warrior woman beating me in the head out of there. Inspired by a poem I wrote for the above mentioned assignment. The class had been reading Beowulf. And at one point we were told to write a ballad about anything. It had to have a certain rhyming technique and a chorus. A Warrior Expected was the outcome. But the woman in the poem did not want to be stuck in that poem and fought her way onto another sheet of paper.
She was given the name of Erane and placed in a fantasy world. As both she and the story progressed, I gave her two best friends, a lover and eventually a title. When I finished Asagai, it went on my computer where it stayed for a few years. After a few other short stories I went back to Asagai and the world of Mitera.
As I went about doing edits and tweaking here and there, Mitera began to feel like I’d lived there myself. Histories, countries and peoples began to invade my mental space and Erane and her friends and enemies spilled over into more stories. More adventures. Let’s just say I don’t want to leave this world. Mitera is my child so to speak. Close to my heart.
And just to think, a teacher first got the ball rolling and the seed planted
Asagai 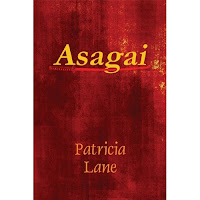 Visit Patricia
Facebook
Posted by Evelyn M. Byrne at 11:18 AM No comments:

Over the last two weekends, I have been running around to different parts of the country. I had the privilege of meeting and talking to well known and bestselling author, Charlaine Harris. I also talked to some authors that are not as well known, but I am looking forward to reading their books.
For all those readers out there, book festivals are the greatest place to meet authors. Some participate in the festival by reading or talking about the art of writing. Others will be in the vender section. But no matter which venue you find them, it is fantastic leaning how they conceived the idea for their books.
For new authors this is a great place to meet readers and to network with so many of your fellow authors. It is also a great place to get your own work to the public.
Tomorrow I am going to have Patricia Lane telling us how she came up with the idea of the world. I met Patricia at the Arkansas Literary Festival. She writes fantasy and developed a world all her own. Come by tomorrow and find out how.
Posted by Evelyn M. Byrne at 10:19 AM No comments:

Last weekend I was up in Arkansas at the Literary Festival. I had the privilege of being accompanied by author Brinda Carey. It was great meeting all the other authors and a few very interesting people. Unfortunately the powers-to-be were not as organized as they had been in previous years and they situated all of the venders in a low traffic area. There were many very unhappy authors, especially those who travel from Illinois and Indiana and those who had attended last years festival. For me it was a disappointing in terms book sales, but the networking side was great. Brinda and I found the most wonderful place to eat, the food was delicious and the service was beyond belief. So if you are ever in Little Rock you have to go over and check out Dugan's Pub on 3rd and Rock.

Tomorrow I am off to Alabama for their book fest. I hope they are more organized. I have already received emails from them so I am anticipating a much better turn out. If any of you are in the area of Montgomery, Alabama, stop in and say hello.

I hope to have some new authors ready to guest blog next week when I get back.

Have a wonderful weekend.
Posted by Evelyn M. Byrne at 12:16 PM 1 comment:

Today I have the privilege of having Jaquelyn Frank as my guest speaker. As an added feature I also get to reveal  her book cover for ADAM. She is having the big reveal of the new cover for Nightwalker book number six in LA at the RT Convention, but I get to do it at the same time.

Thank you Jaquelyn for taking the time out of your busy schedule, especially with the trip to LA, to guest blog for me.

I am often asked how I come up with my characters, their names, the worlds I create, the societies and cultures. Honestly, the answer often comes down to pulling it out of my ass. No, seriously. Names especially. I come up to the spot where I have to type in the name and I try and smoosh vowels and consonants together in effective ways, or I go to a baby name website and see what sounds good. The initial idea for a story invariably comes from drugs. No, seriously! I take a great deal of bipolar medications at night and they have a way of causing these really weird dreams and bam! There it is. An idea. The trick is how to spin it off and flesh it out from there. That's where the hard part comes in. But I have a huge background in this, from back in the days where I was a Dungeon Master, a DM, for my Dungeons & Dragons group. It was tricky being the only girl leading a bunch of guys on an adventure. That's where I think I learned to think like a man, to satisfy the need for action and violence. It's also where you get a lot of practice building unique cultures and creative societies with all kinds of rules your players need to follow. So, with a mesh of drugs, the internet, a D & D background, the talent to satisfy testosterone AND somehow making it romantic, sweet and erotic all at once, I'm going to have to say I'm not so much an author as I am a juggler and a people pleaser. I'm good at making people happy, satisfying their needs, keeping all of my balls in the air at once and somehow managing not to drop them. I imagine sometimes that when I drop one is when I end up getting a sucky review. And I always feel bad about that. I hate the idea of ever letting a reader down by dropping the ball. It doesn't matter if it's one critical review in the face of a hundred fabulous reviews. I still feel bad for letting that one person down. So I try harder. And harder.

It's all about pleasing my reader. Keeping them from getting bored. Using all of those happy accidents listed above and turning them into my talents. It seems I'm doing something right... ;)

Seduce Me in Dreams

Seduce Me in Flames: